Relevance of online legal printable forms for licensee, permitting the sale of cigar and newspapers

Cigar and Newsstand periodicals and magazines are being sold in hotels nowadays. Being sanctioned by the hotel owners, popular brands and companies are often seen endorsing their products and services within the hotel premises. Agreements have been made between the licensor and licensee with regard to such sanctions that were generally not prevalent earlier. In order to keep this agreement valid, agreements are made on a regular basis between the two parties. Several online forums are introducing popular tools in the field of legal procedures which has been proved very useful for people who are involved in small yet equally important legal matters. Such forums are known to offer several sample for required legal documents in form of pre-made agreements.

The only task that remains for the legal parties is to read through the formulations and terms that may be agreed upon and adhere to its policy by signing on the bond. In order to fulfil such task, they do not need the consultations of attorneys.

If the licensee desires to holds its license to sell tobacco products, cigarettes along with newspapers and periodicals, then he should adhere to the policies that have been agreed upon by the hotel owner and him. Cigar and Newsstand agreements are made available to the willing parties for a specific term periods and it has to be renewed after the end of every term. Hence the availability of such printed forms will tend to be useful in every sphere of contracts and bonds that involves legal sanctions and procedures. 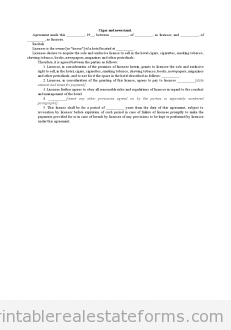